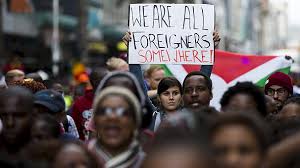 The President of the Union, Ikechukwu Anyene, said in Pretoria, South Africa, that the Northern Cape Province Chapter Chairman of the Union reported the incident to its National Secretariat.

According to Sahara, “The National Secretariat of Nigeria Union has received report of xenophobic attacks from Mr Kennedy Osagie, the Northern Cape Province chapter chairman of the union.

YOU MAY ALSO LIKE:   Jonathan raised fuel subsidy from N300b to N1.9tr - Amaechi

“Two cars belonging to Nigerians have been reportedly burnt and they have been going from house to house looting and destroying their property,” he said.

This has to really stop….. SAD

WATCH ALSO: VIDEO( we are the world) #sayNoToXenophobia

See the huge snake killed at Ewedogbon area of Igando. It was actually killed in the children’s room. This sure looks like a python… Watch…

Dakuku Peterside, the Director-General of Nigerian Maritime Administration and Safety Agency, NIMASA, has declared that the Rivers State Governor, Nyesom Wike will become history in…